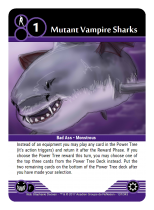 They glide above you and drink your blood when they’re hungry.  They may eat your bones and organs, and muscles too, but that’s just because those things are in the way of your blood.  And I’m pretty sure they taste good.  To sharks anyway.

Mutant Vampire Sharks pull cards you shouldn’t have from the Power Tree into a Face Off.  Then they prevent people from claiming that card after you claim the VC card.  They are awesome in every way. 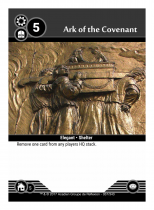 Most things in games, Face Off included, happen conditionally.  Do x if y happens.  Or under q conditions you may do r.  The Ark of the Covenant makes a declarative statement.  Kick someone out of the Power Tree.  Boom.  Done.

True story, I once saw a Cowboy player who was dominating the HQ, use the Ark to kick Billy back into the discard pile so he could be used again in a Face Off.

The Secret to making people like you is playing more Face Off.

But I’ve done A LOT of research on this and I have three whole friends if you count that the one that recently got very, very busy and won’t call me back or respond to my emails or texts or….  Whatever.  He’s really busy.  Anyway the point is, play more Face Off and people will like you.  If you don’t you’ll end up manipulating your husband into murdering his best friend, like Lady MacBeth. 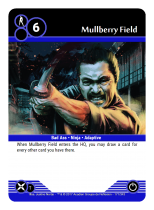 Play this guy and they’ll laugh a lot less –Eventually.

You see Mulberry Field isn’t the strongest personality –Kong –and he doesn’t have the most aggressive action –Lady MacBeth –but what does do is set you up for the future.

Most people eschew Mulberry Field when choosing people from the Power Tree.  Instead they favor people with more raw umph.  But they fail to realize is that Mulberry Field should never be played in a Face Off where he is only mediocre.  He should be played in the HQ.  Even then his value isn’t always revealed.

Mulberry allows you to draw cards.  As many cards as you have in the HQ.  There is no limit.  You could, if you set things up correctly, draw six, seven, even ten cards into your hand.  I’ve seen it happen.  And once you have your deck in your hand, well then all your other combos are locked and loaded for the next four turns.

So Aristotle may edge out Mulberry in the short term, but for the Schemer, Mr. Field is the winner every time. 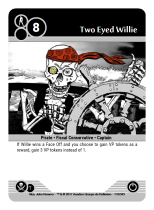 Which isn’t as long as Willie.

Willie is one powerful piece of cardboard.  With a power of 8 he is stronger than every starter, and only behind five power tree cards.  Plus his action, which gives you victory tokens, allows you rack up points regardless of what your opponents are planning.  He’s like your own personal ATM.  Only instead of cash Willie hands you wins.

You can always talk about this awesome new game –Face Off.  Perhaps you’ve heard of it.  It will finally be revealed in Full at Gen Con on Thursday.  In the mean time full card previews start tomorrow!

Well worry no more.  You can now practice Face Off anytime you want, and put a stop to these embarrassing habits. 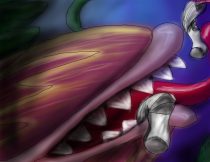 You’ve made it here.  We like you more than we ever have before.  If fact we like you so much, we’ll loan a pair of socks should yours ever be eating by a giant plant. 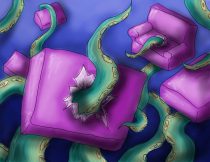 When you’re a seductive Tentacle Monster it’s easy to frustrate your enemies.  But when you try to help your friends find their keys (the ones you know they lost in the sofa) sometimes it’s confusing.

Things could always be worse.  You could be wanted for Piracy.

On the other hand, Face Off makes you feel awesome.