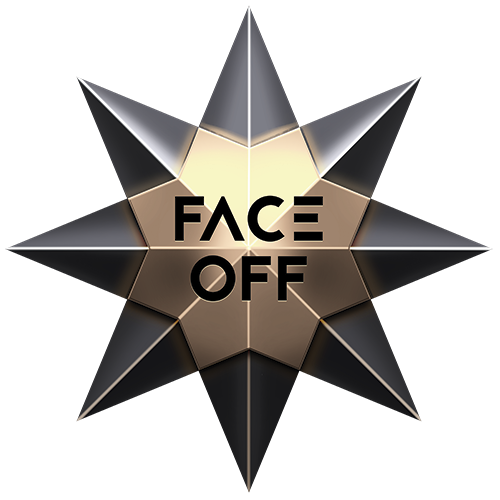 The changes to the Game of Awesome version 2.0 were so dramatic the name of the game changed to Face Off. But I wanted to acknowledge where I had come from and the progress I had made, so I kept the numbering system. Thus The Game of Awesome 2.0 became Face Off 3.0.

The first major change was the destruction of generic cards. Now everyone started with named, cool cards.  Why start with lame when you can start with cards that are fun to have in your hand and even more fun to play with?

Second, I split the power tree and the clock deck. I liked the way the ‘tree’ limited your choices, and there are subtle strategy tricks in blocking what cards were available for players to take that are important to master. Thus the Power Tree we all know and love was born. I briefly experimented with five cards on the bottom row, but for space reasons more than anything else, I soon cut it to three cards on the bottom, two in the middle, and the deck on top.

The clock deck, then, was divided into green, yellow, and red backed cards. And there were forty five cards in the deck. The game called for players to play all 45 cards. The only problem was the game stopped being fun after about 25 cards. By that point it was clear who was going to win. And we were just playing out the string.

The market was back. It was a bidding market. Players bid on how many ‘cloggers’ they were willing to take into the their decks in order to gain cards.

And finally locations made it back too, we called them Headquarters or HQs. To get around the problem of having dead cards in your hand, I got rid of location specific actions. Now all cards worked equally well everywhere.

Face off 3.0 felt really close. There were just a couple of tweaks (as noted above) that needed to be made. I was positive Face Off 3.5 was going to be the final, publication ready version.

To see how Face Off 3.5 got a lot a WHOLE lot worse, tune in next week. Same bat time. Same bat channel. Same goofy jokes.